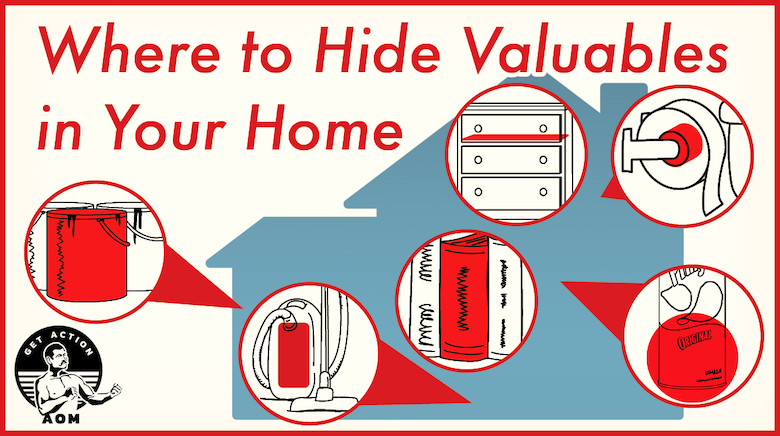 Whether cash, passports, jewelry, or other important valuables, we all have things we need to hide now and again, whether from the prying eyes and hands of children or the unnerving but very real threat of burglars.

Luckily, a lot of the stuff you really want to hide is pretty small and inconspicuous. Many people rely on safes to store these things, which is a good option, but you donâ€™t necessarily want to keep all your goods in one location. If you think just a little bit outside the (steel-reinforced) box, there are a lot of places in the home that can be as secure as a (typically quite conspicuous) safe.

Do keep in mind that if youâ€™re utilizing multiple hiding places, you also need to remember where this stuff is. Write it down and keep it in a safe place. Iâ€™ve been guilty of finding cash in unexpected spots years later. 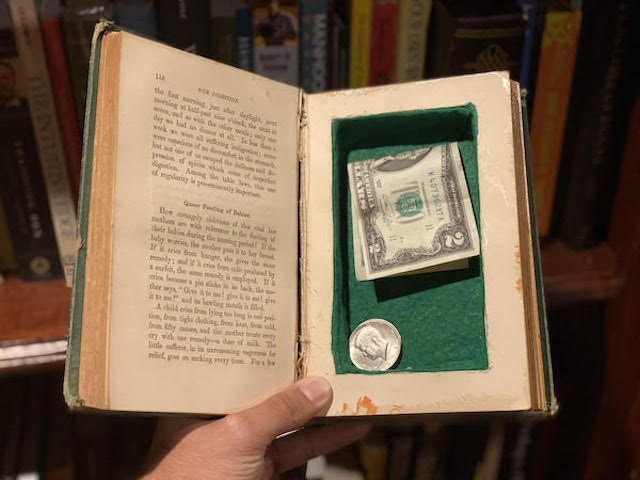 Brett and Kate have previously covered how to make a secret safe out of a book. Itâ€™s a pretty easy evening or weekend project: find a book (the more boring the title the better; you donâ€™t want non-criminal guests and children to curiously grab it to thumb through), hollow it out, add your goodies, and stash on the shelf. If thatâ€™s too small for what you have in mind, Family Handyman has a good instructional on making a larger, multi-volume book box.

This is a great option, in my opinion. Anything with a large open cavity is a good spot to stash some valuables. Modern garage door openers have a large space at the back where the light bulb is; old and unused electronics like TVs and computer towers often have space; the best of the bunch, though, might be an old, unused/non-functioning vacuum cleaner. Canister types arenâ€™t great because theyâ€™re often made with a clear plastic that would reveal the valuables stashed within, but the kind that uses a bag is perfect. Take the bag out, place your goodies inside, and put the cover back on. Keep it in a closet and no burglar will touch it. A non-working shop vac stored in the garage is a good choice too. 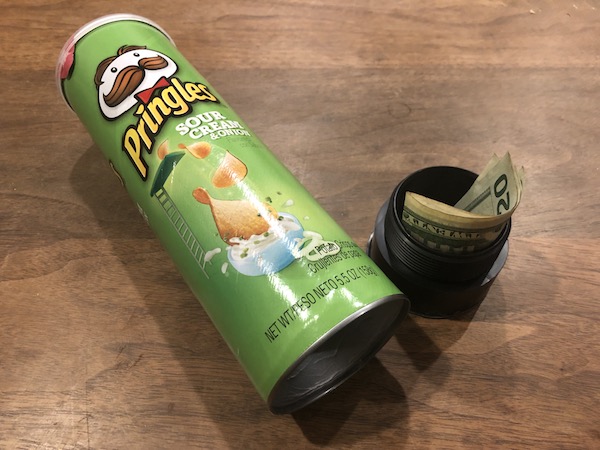 Itâ€™s common for burglars to search through liquor cabinets and pantries, so you donâ€™t want them to be able to simply lift the lid off an oatmeal canister and see a roll of cash sittinâ€™ in an otherwise empty container. What you need is a pantry item that looks like the real deal, but hides a secret compartment within.

Enter the transformed Pringles Can. You can cut away the bottom of a can of potato crisps to make a small and functional safe with a bit of PVC and hot glue. If you open the lid at the top of the can, you see Pringles stacked inside it, just like the real deal. The problem, of course, is that you (or another family member) might forget the safe is there, eat the chips, and toss the can in the trash. It might be better to put your Pringles can next to your computer or on a shelf in the garage; Mr. Burglar will think you just like to snack outside the confines of the kitchen. Sometimes the least suspicious â€œhidingâ€ spot for something is in plain sight.

If the idea appeals, there are any number of false containers you can buy for your fridge and/or pantry. Fake Spam might be my favorite.

Secret compartments in drawers and cupboards have been used for centuries for hiding treasure maps, money, and jewelry alike. A false bottom drawer creates a space between the original bottom of the drawer and the â€œfakeâ€ bottom that youâ€™re creating. That inch or two of space can hide any number of valuables.

You might think you need some DIY chops to make one, but even a total noob can do this project in less than an afternoon. All you need is a thin board, ideally one that somewhat matches the real bottom, cut into the size of your drawer and some supports to keep it off the original bottom of the drawer. This version from The King of Random provides an additional layer of security via a magnetic locking mechanism and secret â€œkeyâ€ (which is just any long, thin object like a pen or wooden dowel).

Though false bottom drawers make for pretty well-hidden compartments, burglars are certainly aware of their possible existence. So stay away from putting them in the drawers of a master bedroom nightstand or an office desk, as this furniture resides in two rooms that burglars hit most often and take the time to search beyond the obvious places. To make it especially secretive, do it with a kidsâ€™ dresser or the guest bathroom vanity. Any kitchen drawer also works, just make sure to do it with a deep one.

Back of the Drawer 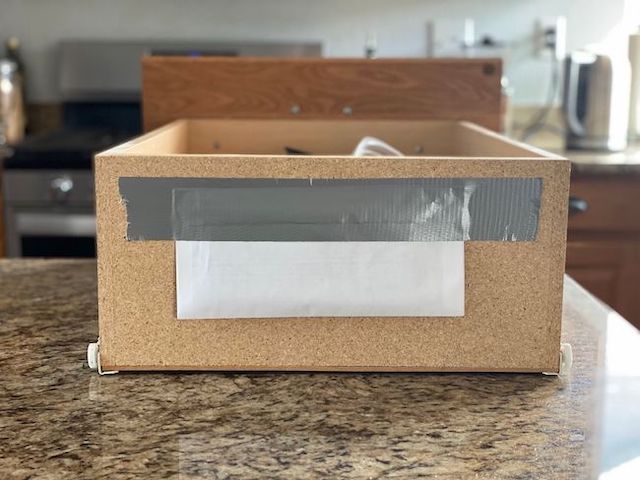 If the false bottom doesnâ€™t appeal to you, you can take the entire drawer out and duct tape an envelope of cash or secret identity papers to the back of it. Thereâ€™s always some space in the back of the dresser or cabinets, so nothing will get too squished.

Take advantage of simple labeling to store some valuables in plain sight. While burglars may look through a storage room, they arenâ€™t likely to reach for a box that says â€œKids Clothesâ€ or â€œCollege Textbooks.â€ Donâ€™t keep anything too valuable out in the â€œopenâ€ like that, but it can work for low-value things you still want hidden, or even holiday/birthday presents.

Every homeowner has a stash of old paint cans that are likely either dried up or nearly empty. Take one or two that you donâ€™t need and store just about anything small and valuable inside them and in a plastic bag. No burglar is going to rummage through a collection of old paint cans. 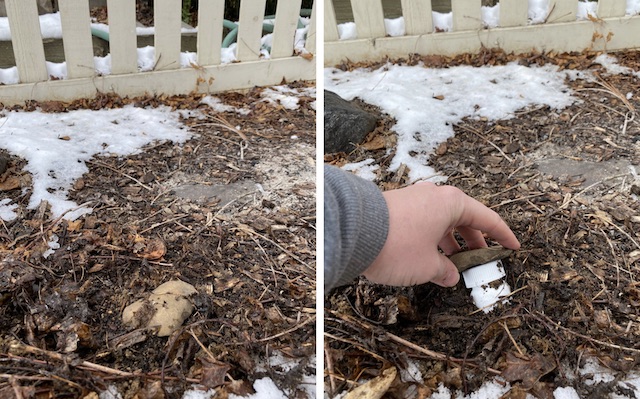 Medicine cabinets are one of the first places that burglars tend to look. Theyâ€™ll take all the drugs indiscriminately for their street value. So donâ€™t go hiding things in there. But medicine bottles can still be useful as containers in which to store a valuable, which is then secreted outside the bathroom. For example, instead of the usual hiding places, stash your extra house key in an old Advil bottle and super glue it to the bottom of a real rock (those fake ones always look it). Then make a little cavity in the dirt and place the bottle down inside it, with only the rock showing on the surface.

If youâ€™re feeling ambitious and need quite a lot of secret storage â€” perhaps youâ€™re working on some Jason Bourne-esque operation â€” consider installing some fake PVC piping as fake plumbing in a storage area. Using as big of a pipe as you need, start from the wall, add as many segments as desired, include a cleanout for easy access, and never worry again about someone finding out your secret identity. 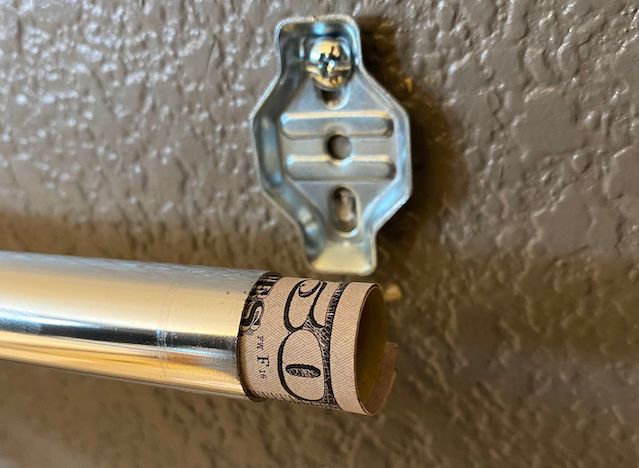 None of the TP tubes in my home are hollow, but I have a towel bar that works perfectly as a hiding spot.

This trick is only good for a pretty limited range of secret stashables â€” cash, small notes, a mini USB drive (wrapped in a napkin to muffle the noise) â€” but utilizes a spot that wonâ€™t be searched by burglars. Not every toilet paper holder tube is hollow, but if you have one, consider using it.

You can do the same thing with towel racks/bars, but those are a little less accessible since you often have to unscrew one of the ends to access it. Talk about secure, though.

Burglars may actually look in the freezer â€” they know itâ€™s a popular place to hide valuables â€” but theyâ€™re likely to be checking for out-of-place items. So if youâ€™re going to stash something in there, put your valuables on the bottom, and make sure theyâ€™re hidden in actual food containers/bags. Something like an emptied-out sugar-free ice cream container or a Costco bag of cauliflower rice â€” in other words, stuff even your homeâ€™s lawful tenants are disinclined to pick up. 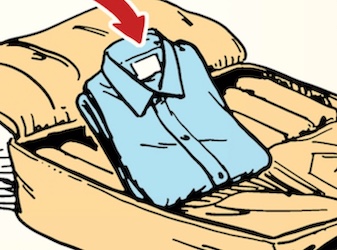