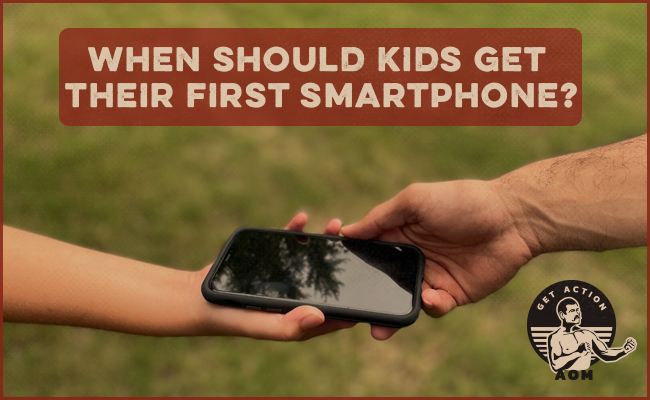 Parents have long had to figure out when to let their kids pass through certain “firsts” and milestones as they grow up. First time walking to the bus stop by themselves. First time riding their bike to a convenience store on their own. Getting a job. Getting a driverâ€™s license.

In each case, the parent must decide whether in granting a new privilege, the child is ready to take on the responsibility that goes with it. They must weigh whether the risks that are attendant to the new freedom are worth the benefits the child will gain. With the exception of getting a driverâ€™s license, no external entities set a definitive age for when an appropriate balance of these factors is typically reached. Parents just have to use their practical wisdom, and wing it.

The improvised nature of these kinds of decisions is particularly acute when it comes to dealing with an issue that didn’t even exist when many of today’s parents were growing up: when a kid should get their first smartphone.

Whatâ€™s the Right Age to Get a Kid Their First Smartphone?

When to allow a young adult to get their first smartphone is a fraught question. On the one hand, there is research that links the amount of time a person spends online with higher rates of depression and anxiety, and every adult knows how much distraction their own phones create â€” and theyâ€™re not even as socially attuned and connected as their kids!

On the other hand, having a smartphone can be crucial for allowing young adults to socialize with their friends these days (and for facilitating schoolwork and extracurriculars as well). Cutting them off from those opportunities to integrate with their peers may cause the very depression a smartphone-withholding parent is trying to prevent.

The average age at which a child gets their own smartphone these days is ten. But is that actually a good age for parents to introduce this kind of powerful technology into their childrenâ€™s lives? Is there a best age to introduce a smartphone that allows kids to take advantage of its connection-building benefits, while mitigating its potentially negative effects?

While answering this question isnâ€™t a science, we wondered how folks who have spent a ton of time thinking about the impact that digital technology has had on human minds and culture would weigh in on it. (Bill Gates, for one, didnâ€™t allow his three children to have smartphones until each was 14 years old). We thus reached out to three tech thinkers to see what they had to say:

Dr. Larry D. Rosen is a professor emeritus of psychology, and the co-author of The Distracted Mind: Ancient Brains in a High-Tech World. You can listen to our podcast interview with his co-author on that book, Adam Gazzaley, here.

â€œI used to say that 12 or so was the magic age when kids discovered social media and communicated virtually with their friends. Now, however, with the pandemic as well as the increasing use by preteens, I say that 10 or 11 is fine if the child is missing out on socializing.

However, I am adamantly opposed to just giving a child a phone with no limits or boundaries. It should be clear from the start that the phone belongs to the parents and that the child gets the privilege of using it as long as it is used appropriately. This means lots of discussion between parents and the child to find those boundaries. One clear boundary is no phone before homework is done. Another is setting a time limit on phone use and only allowing adding new apps with the parentâ€™s permission.â€

Dr. Adam Alter is a professor of marketing and psychology and the author of Irresistible: The Rise of Addictive Technology and the Business of Keeping Us Hooked. You can listen to our podcast interview with Adam about Irresistible here.

â€œThe sweet spot is allowing your kids to use screens as late as possible â€” but not so late that your decision to withhold puts them in a difficult position socially. It’s a tough line to walk. I donâ€™t think there’s a single age that works equally well for everyone, but I wouldnâ€™t let my kids use screens until they’re old enough to have a reasoned conversation about the major issues: when and how much screen time is appropriate; why we donâ€™t use screens without limits; what to watch out for (bullying, abuse, etc.); which platforms are okay and which ones aren’t (which should obviously evolve as kids age. I donâ€™t think many kids are mature enough to handle the stresses of screens until their mid-teens, though very few kids start using social media platforms that late.â€

Cal Newport is a computer science professor and the author of seven books, including Digital Minimalism: Choosing a Focused Life in a Noisy World. You can listen to our podcast interview with Cal about Digital Minimalism here.

â€œI lean toward waiting until at least 16 years old to give teenagers unrestricted access to smartphones. In the interim, feature phones can be used to support their ability to text with family and friends. The evidence around the harmful effects of giving a hyper-social and volatile adolescent brain unrestricted access to brain hacking services like social media and video games is worrisome. In most cases, it’s easier to work on solving the social issues surrounding having no smartphone at that age than it is to solve the issues caused by having one.â€

Itâ€™s often said in these kinds of discussions that there isnâ€™t a â€œrightâ€ age for a kid to get their first smartphone, that it will depend more on the kidâ€™s individual level of maturity than a set chronological number. And while that may be true for landing on a gradient within a range, weâ€™d argue it isnâ€™t true for setting a minimum age. Parents should have an idea of a hard line before which they will not allow their children’s minds and lives (and the life of the family as a whole) to dramatically change. Because, make no mistake about it, the introduction of a smartphone into your childâ€™s life will greatly alter it. Their head will be increasingly buried in their phone, with less of it facing towards you and the outside world in general.

So while no writer or professor can tell you the right age to introduce a smartphone to your child, all would be well served to keep the caveats and considerations that were raised above in mind: Start with a â€œdumbphoneâ€ that only allows for things like calls and texts, and see how your kid handles it. When you do let them segue to a smartphone, have thoughtful conversations about the lifelong repercussions of what they share online (â€œNever share anything you wouldnâ€™t want broadcast to the entire worldâ€). Be emphatic about the importance of balancing digital communication with the in-person kind, demonstrating the value of face-to-face interactions both in your words, and even more importantly, in your example. Set clear boundaries for when your child can (after homework is done) and canâ€™t (at the dinner table) use their phone. Some parents even draw up more formal â€œcontractsâ€ delineating such guidelines (and the consequences for violating them).

To get a driverâ€™s license, the law sets a minimum age and requirements which include taking classes that involve both â€œbook workâ€ and hands-on instruction; often, the adolescent must first obtain a â€œlearner’s permit,â€ which sets limitations on when and how they can drive, and requires an experienced driver to ride along in the passenger seat. While operating a vehicle does come with serious physical dangers, using a smartphone carries its own set of pitfalls. As such, earning the privilege of the latter milestone, should be premised on completing just as much education and mentoring as the former.