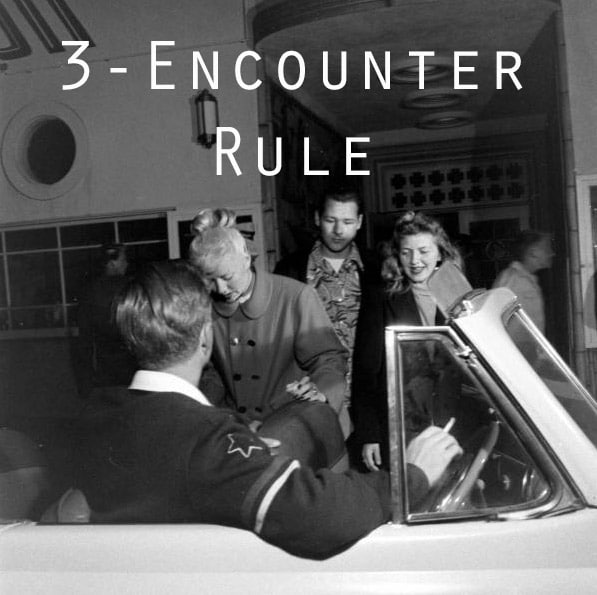 Awhile back, a couple who Kate and I knew mostly in passing and moments of small talk at church, invited us over to their house for dinner. We gladly accepted the invitation, as we love when folksÂ take the initiative in getting to know people (and we in turn love hosting people at our house).

The dinner wentâ€¦okay. Decent conversation, a fine enough time. But Iâ€™ve come to discover that, to a surprising degree, making friends in adulthood resembles romantic matchmaking and courtship, and one could say that no real â€œsparksâ€ flew between us that evening. We didnâ€™t experience a compelling connection with these folks.

But we felt that, out of politeness, we ought to return the gesture and have them over for dinner at our place. While we dragged our feet for a couple months before offering the invitation, this second shared meal turned out a little better — the conversation was a bitÂ deeper and more engaging; an easier rapport was beginning to be built.

We made plans to go out to dinner together the next time our gym held a â€œParents Night Out,â€ and this third encounter was more enjoyable still.

Today, we count this couple among our good friends, and we hang out regularly. Itâ€™s a relationship that wouldnâ€™t have developed if we had insisted on â€œfriendship at first sightâ€ and hadnâ€™t persisted in seeing how things might develop.

We live in an age of instant gratification — if something or someone doesnâ€™t engage us right away online, we can immediately surf or swipe to the next thing. Weâ€™re always on the hunt for that which will exactly meet our personality, interests, and expectations, and we think weâ€™ll know it when we see it. And actually, we do sometimes experience these instant connections with media or consumer products.

Unfortunately, we often subconsciously carry this consumer mindset into forming relationships with others, and it doesnâ€™t work so well with people.

Sure, sometimes you connect with someone right off the bat, but frequently things can be a little stilted and awkward when you first meet someone, and itâ€™s possible to mistake this awkwardness for a lack of compatibility. People are guarded and typically terrible at small talk (they havenâ€™t read our guide!), and this can obscure a potential connection with them. It often takes several encounters, as well as a change in the circumstances wherein you interact, for commonalities, connections, and deeper conversations to emerge.

For example, you might have passing interactions with a co-worker day-in-and-day-out for months without ever thinking, â€œThis guy could become a good friend.â€ Then one day, youâ€™re asked to drive somewhere together, stumble onto a conversation topic where you both have a lot to say, discover you share a common hobby, and end up making plans to meet outside of work to pursue it together. A great friendship slowly builds from there.

Iâ€™ve seen this phenomenon of friend-making play out several times in my own life, and from these experiences Iâ€™ve formulated what I call the â€œ3-Encounter Rule.â€ Iâ€™ve found it takes on average about 3 encounters — and by thatÂ I mean intentional rather than passing interactions where youâ€™ve gotten together primarily to just hang out — to really see if thereâ€™s potential for a relationship with someone.

The rule pertains both to the realm of friendship and to romance. In fact, it may be even more key to remember when it comes to dating in the modern world.

The 3-Encounter Rule and Dating in the Age of Tinder

In Modern Romance, comedian-turned-courtship-researcher Aziz Ansari advocates for increasing the quality of your dates; but he also argues for upping their quantity as well.

As a single guy in New York City, he observed that he and his friends â€œwent on a lot of first dates but not as many third datesâ€:

â€œWe were consistently choosing to meet as many people as possible instead of investing in a relationship. The goal was seemingly to meet someone who instantly swept us off our feet, but it just didnâ€™t seem to be happening. I felt like I was never meeting people I really, really liked.â€

Aziz was frustrated by these results and wasnâ€™t sure of what he was doing wrong — was it him, the people he was asking out, or his dating strategy in general?

Aziz decided to try an experiment where instead of taking several different women on several first dates, heâ€™d take one woman on several dates.

With Azizâ€™s former strategy, if a date had only been a 6 overall, he wouldnâ€™t ask that woman out again, and would instead start texting other ladies who he hoped would give him an 8 or 9 result. Now, if a first date had at least been decent, he asked for a second one. The results of his experiment turned out to be quite amenable:

â€œWhat I found is that a first date that was a six was usually an eight on the second date. I knew the person better and we kept building a good rapport together. I discovered things about them that werenâ€™t initially apparent. Weâ€™d develop more inside jokes and just generally get along better, because we were familiar.

Just casually dating many people had rarely led to this kind of discovery. In the past I had probably been eliminating folks who could have possibly provided fruitful relationships, short- or long-term, if Iâ€™d just given them more of a chanceâ€¦

Instead of trying to date so many different people and getting stressed out with texting games and the like, I was really getting to know a few people and having a better time of it.â€

The strategy of investing more in one woman, rather than dating serially, paysÂ off because the qualities that are most important to the success of a long-term relationship take time, and multiple encounters, in order to fully emerge and be discovered.

Studies show when people meet others for the first time, they largely reach a consensus about who is, and who isnâ€™t, desirable. That is, if you ask people to evaluate new acquaintances on traits like attractiveness, status, warmth, trustworthiness, and the ability to provide a satisfying romantic relationship, most people will offer around the same ratings for the same person.

Yet, over time, as the folks get to know each other better, this consensus falls to almost zero. What people come to learn about each other colors and transforms their perceptions; one person will rate another as ranking high in these qualities, while another will rank the same individual as being low in them. Think about a group of your mixed-sex friends whoâ€™ve all known each other for a long time; if you ask each person to evaluate each otherâ€™s â€œmate value,â€ youâ€™d get a wide variety of responses.

We all have unique, idiosyncratic rubrics for how we evaluate a potential mateâ€™s assets and shortcomings; what does it for one guy, doesnâ€™t do it for another. Within this rubric, the qualities all people lend the most importance in initial encounters (attractiveness in women; status in men) wane in importance with time, while the importance of unique qualities that underlie compatibility and the long-term success of the relationship wax.

The fact that our evaluations of people greatly shift over time, corresponds to the fact that most people begin a romantic relationship with someone theyâ€™ve known for awhile in a non-romantic capacity. In fact, a survey of adolescents showed that only 6% hadnâ€™t known each other before becoming romantically involved; 53% had formerly been acquaintances, and 41% had been friends. Another study found that on average, the woman a single guy is pursuing at any given time, is someone heâ€™s known for over a year.

The majority of romantic relationships thus begin between two friends or acquaintances whoâ€™ve known each other awhile, who understand, and appreciate, each otherâ€™s idiosyncrasies, and who suddenly get hit with a spark that causes them to shift their perception and see each other in a new way. â€œOh, hey, I like this person.â€

Yet in the Age of Tinder, with the hypothetical ability to go on as many first dates as youâ€™ve got time, guys expect to go from 0 to 60 with a stranger on the first date. They think sparks will instantly fly from the moment they meet a girl theyâ€™ve only seen on their phone. It could happen, but it might not, and if it doesnâ€™t, that doesnâ€™t automatically mean thereâ€™s no chance of the relationship going somewhere.

We can be terrible judges when it comes to gauging relationship potential with someone weâ€™ve just met — especially on a first date when people can be stiff, nervous, and awkward. Sure, much of physical attraction is instinctive, but the qualities that might make you uniquely compatible with someone will end up being more important, and donâ€™t always emerge right off the bat; you may need more than one date to figure out if theyâ€™re there, or not.

There are times when you meet someone and know theyâ€™re going to be your future best friend or soul mate right from the get-go. But there are also instancesÂ when it takes some time and a series of shared experiences for you to see them in a new way and for a connection to emerge.

The â€œ3â€ part of the 3-Encounter Rule obviously isnâ€™t set in stone; sometimes you truly know after just one outing that a person isnâ€™t right for you in any way, and sometimes it takes more than 3 encounters for a connection to make itself known. In the case of the former, you donâ€™t have to waste your time and/or money pursuing what is clearly a dead end. What the rule simply means is that if youâ€™re on the fence about someone — thereâ€™s a chance thereâ€™s something between you, but youâ€™re not sure — then pursue it a little further, until you fall to one side of the fence or the other.

Instead of instantly swiping potential friends and lovers away, invest a little in them, and you just might discover the richest relationships of your life.