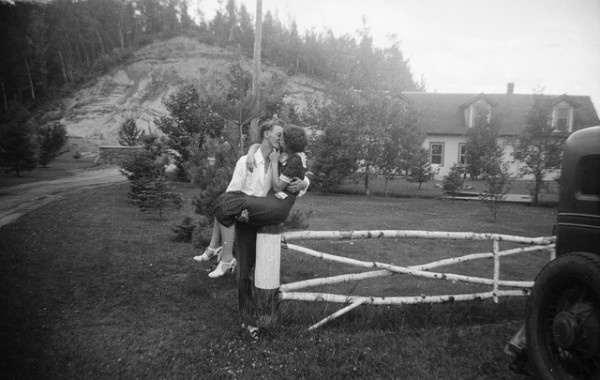 Editor’s note: The following excerpt on “Advice to the Newly Married” comes from The Business of Life by Frank Crane, published in 1920.

Now, young folks, you’re just fresh married, you’re as happy as June-bugs, life seems one infinite, rimless custard pie, and Messrs. Joy and Gladness, so to speak, seem to have moved in to stay, occupying the front room and being present at all meals.

Hence open up your ears and hearken unto your Uncle Dudley while he exudes a few words of thee-star wisdom.

I’m not going to give you a lot of advice, but just one piece, small enough to take, to remember, and to practice.

So just hold hands a spell, withdraw your beaming eyes from each other’s countenance, move your ears forward, pointing toward your uncle, and listen.

You’re going to have trouble. Because you’re human. And man is born to trouble as sparks fly upward, as the Scripture says.

You won’t always be happy. You’ll have your share of weeping and your hearts will quake when their turn comes — break, maybe. You too will walk the floor of nights or lie abed looking red-eyed up at the dark, just as your mother, father, grandparents, and ancestors on back to Adam have done.

When that time comes I want you to remember this one thing your Uncle Dudley told you. One thing. And worth one million dollars. It is this. Are you listening?

DON’T LET ANY TROUBLE GET IN BETWEEN YOU!

The accent is on the word BETWEEN.

All the trouble in the world is not going to bother you so long as it is on the outside. You’ll have enemies, but none of them can hurt you if they do not get between you.

You’ll have disappointments, bereavements, disillusions, failures, regrets, mistakes, angers, and resentments; and you can resist seven tons of such stuff provided you stand together and don’t let any of it seep in between your two hearts.

Be partners. Be allies and swear never, either one of you, to make a separate treaty with the enemy.

Don’t have secrets one from the other. Organize your own oath-bound secret society now. Lock yourselves in, and the rest of the world out, even darling mother-in-law.

Beware of the Intimate Friend to whom you tell things about your wedded companion. Said I.F. has broken up more couples than any other known snake. Be your own Intimate Friends.

Gossip, tattle, and tell all you know to each other all you please, but not about each other to any third party. Remember that Three is a fearful crowd when it comes to married folk. The corners of the Eternal Triangle are both sharp and poison.

When reverses come, or even poverty, loss, or debt, just cuddle up closer together, and you can laugh at them.

Don’t let the darkness of dark days get in between you and separate you. Don’t let even your children, when they come, and I hope there’ll be a lot of them, get between you and alienate you. That sometimes happens.

Remember — one thing only I’ve told you — write it down and hang it up on your wall: “There’s bitterness in this world, but it can’t make us bitter if it doesn’t come between us.” You’ve sworn “til death do us part, and for better or worse.” Stick to it!